For the start of summer, we checked out the site of the NCAA Division 1 Outdoor Track and Field championships but for June we pivot directions slightly with a trip across the Atlantic for this Pléiades 1 – SPOT 6/7 Stadium of the Month with a look at the site of the ongoing Wimbledon Championships, The All England Lawn Tennis and Croquet Club. 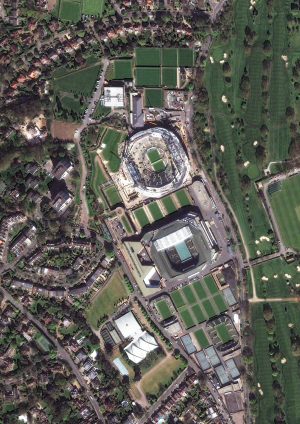 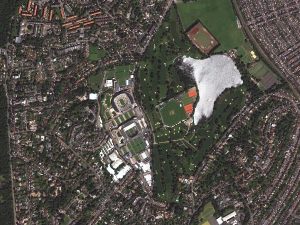 A 50-cm color image of the All England Club in London, United Kingdom collected on April 8, 2017 by Pléiades 1A; and then a 1.5-m SPOT 6 image of the same stadium collected on June 10, 2017. These images have custom processing and color balancing applied by Apollo Mapping. PLEIADES © CNES 2018, Distribution Airbus DS. SPOT © Airbus DS 2018.

Location: The All England Club, as locales sometime refer to it as, is located in southwest London in the Wimbledon district. AELTC is some 41 miles (66 kilometers) from the shores of the Atlantic Ocean at about 70 to 80 feet (21 to 24 meters) above sea level.

Stadium Capacity/Size, Architect & Build Date: In the early days of the AELTC, it appears that the atmosphere was more of a weekend picnic or festival with no formal seating. All of that changes in 1922 when an 11,000 or so spectator tennis stadium was opened and the hugely popular July tennis championship was renamed the Wimbledon Games. During World War II, it appears that the stadium was damaged and then rebuilt. Today there are 19 championship level tennis courts on the AELTC grounds with on-going construction to expand the seating of the two center courts as well as a series of other major and minor improvements.

Type of Field Surface: Are you surprised to find out that the grass courts of Wimbledon have been the subject of independent research by The Sports Turf Research Institute (STRI)? I doubt you are! In 2001, STRI recommended changing the seed mix on the grass courts to 100% perennial ryegrass from a 70% rye and 30% creeping red fescue mix for improved durability.

Key Sports Teams: Unlike many of the stadiums we have covered in this ongoing series, AELTC is the home of a key tennis grand slam championship, Wimbledon, and is not home to a sports team. Wimbledon is the oldest tennis tournament in the world, the only tennis grand slam held on grass and also is often considered the most prestigious tennis event of the year.

Most Popular Yearly Event: Outside of the obvious event, Wimbledon, the grounds of the All England Club cover more than 42 acres on which there is far more than tennis and croquet courts. For example, the Wimbledon Village features a collection of shops, restaurants and bars – all with their own ongoing nightly events as you can see here!

Fun Factoids: (1) While grass courts are pervasive in rainy England, they are few and far between here in the States as this list of lawn tennis locations attests too! (2) The first lawn tennis tournament was held in 1877 at AELTC and this tournament was later recognized as the first tennis Grand Slam championship. (3) Unlike many sport events, there is a strict dress code for the participants of Wimbledon, they must dress in all white – and if they are not, umpires can tell players to change before a match. (4) Yellow tennis balls were used for the first time at Wimbledon in 1986 and apparently 54,250 balls are used during each Championship. You can check out more fun statistics about Wimbledon here.