In September we checked out one of the two Major League Baseball stadiums in Chicago, and for this month’s edition of the Pléiades 1 – Pléiades Neo Stadium of the Month we stay in the USA with a look at one of the National Football League’s (NFL) newest stadium in Atlanta, Georgia, i.e. Mercedes-Benz Stadium. 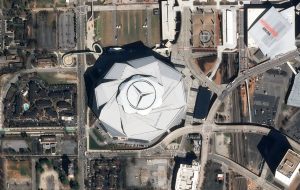 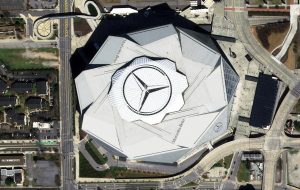 A 30-cm color image of Mercedes-Benz Stadium in Atlanta, Georgia, USA collected on March 20, 2022 by Pléiades Neo 3; and then a 50-cm Pléiades 1B image of the same stadium collected on March 4, 2022. These images have custom processing and color balancing applied by Apollo Mapping. PLÉIADES © CNES 2022.

A quick update here for our readers on the 30-cm Pléiades Neo constellation!

As of now, plans are on track for Pléiades Neo 5 and 6 to launch in November with expected commercialization of the data by the end of 2022 or early 2023. When fully operational, the 30-cm Pléiades Neo constellation will collect some 2 million square kilometers of imagery per day with the ability to image locations twice per day.

About the Stadium: Mercedes-Benz Stadium is located just to the west of Atlanta’s downtown corridor and Hotel District, well within walking distance at some three-quarters of a mile (1 kilometer) away. The vision for Mercedes-Benz Stadium was born in May 2010 when the NFL’s Atlanta Falcons expressed interest in replacing the Georgia Dome. By March 7, 2013, the Falcons and the City of Atlanta agreed on plans to build the replacement stadium in the Vine City neighborhood – breaking ground in March 2014 with Populous leading its construction. Completed in time for the Falcons’ preseason game on August 26, 2017, the stadium cost some $1.5 billion to construct and currently features 71,000 seats which is expandable to 75,000 seats. Mercedes-Benz Stadium features a state of the art FieldTurf Revolution 360 surface which is reported to be the strongest and most durable synthetic grass on the market.

Fun Factoids: (1) Mercedes-Benz Stadium is home to an October 16th matchup between the Falcons and San Francisco 49ers, but that is not why we are featuring this stadium as well the Falcons are not expected to be a playoff contender this season. Rather we are featuring Mercedes-Benz as it is one of the newest and most unique looking stadiums in the league! (2) Perhaps the most striking feature of the stadium is its rose-petal shaped retractable roof that is comprised of eight 220-foot long ‘petals’. The petals appear to open like a camera lens but are really moving in unison along 16 tracks. The roof can open in eight minutes and close in seven. (3) Mercedes-Benz Stadium was the first professional sports stadium to achieve an LEED Platinum rating – you can read more about its sustainability features here; and then here is a full list of interesting facts and comparisons to the old Georgia Dome.

The Apollo Mapping sales team can answer any questions you might have about Pléiades 1 and/or Pléiades Neo. We can be reached at (303) 993-3863 or [email protected].

Share This Article
This entry was posted in Uncategorized and tagged Neo, Pléiades 1 Stadium of the Month, The Geospatial Times Bookmark the permalink.