I’ve never been a Casanova, always been a dork. Mostly a wallflower, never been good at the approach, always needed the introduction. So way back when in middle school when they started having social functions, school sponsored mixers to introduce the awkward ones to one another, I never quite learned how to do it. I mostly hung out with my friends, chatting about those who figured it out, including making fun of those from my own friend circle who did. We couldn’t do it so we had to belittle our friends that could; clearly masking our frustration in making any progress with the opposite sex. But mixers and dating aside, about the time we entered middle school (or at least around then when I was growing up) is when you learn how to really gossip, to spread “fake news” and revel in others’ lives, both in glory and in failure. Middle school is where we really learn to be mean to one another. It doesn’t help that this period of our life is also when our hormones are starting to rage and our bodies are changing. If you’re wondering when we lose our innocence (not our virginity, but maybe for some), I’d say it is definitely middle school (junior high for you old fogies). It’s where we become adults; those people that we mostly all hate.

Well, I recently returned from a “professional” conference which turned out to be more middle school than anything else. No one in their right mind goes to conference for the sessions; if you do it right, you go for the socialization. This is the only true way to expand your network: by breading bread and clinking glasses with those in your field. Strengthening existing bonds is the conduit to building new ones. Of course you may stumble through the conference, popping your head in here and there, participating in some of the sanctioned events, but for the most part, those are a waste of time. Really. That’s where you find the bad side of middle school. The good side, the joking around with your buds, revelry in a foreign town; that happens “afterhours” and disconnected from any structure of the conference. The bad side, the gossip, occurs in the conference halls, and especially the sanctioned social events: the equivalent of middle school dances. 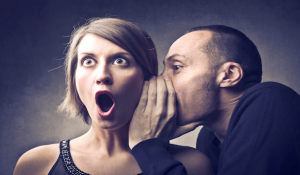 Get a life, dorks.

I went to the young professionals social one night, though I am neither young nor professional, solely to cruise the talent. Our field is ugly and male, so I didn’t expect to find much, but I had to try. And what do you know? I stumbled onto a half-decent single gal. Well, long story short, we hung out for a bit, I walked her to her hotel where we ran into someone else I knew from the field, and we all chatted together briefly, then I was off to another unscripted, non-conference gathering of friends. You know, where the fun happens. I didn’t put much thought into this brief time spent with this young lady (we did smooch a little, nothing else), and the next day I saw her intermittently here and there. We planned to meet a bar later that night at another unsanctioned conference social where a friend was DJing. I expected we might smooch some more. Boy, was I wrong.

She was hesitant to get up and dance, or really hang out too much. Maybe it was cultural (she is from another country), maybe it was her status in the field, emerging professional, but she was hesitant. Oh well, no matter. It was destined to be ephemeral anyhow. On to the next one… Well, I shot her a text later that night and told her it was nice to meet her and that was that. The next morning she texted me (I had a very early flight) that she wanted to chat. Apparently one of her mentors indicated that I was not happy that she spoke to some other guy. As if. I’m not territorial and I literally only just met her; we were both going far away from our central rendezvous in a matter of days. But as we all know, people love to talk. Especially when they don’t have anything exciting going on in their lives. So they did. Too bad there was nothing worth talking about.

Over the next few days I got texts from this girl asking me what I told to whom. Nothing. There was nothing to tell. And if there were, and I had, it would have only been to a select few, folks that have far better things to do than spread gossip. But apparently her clique thrives on it, and especially thrives on tormenting her about it. And I think she was especially ripe for being bothered by this sort of thing. A perfect storm, of sorts. Eventually I found it rather frustrating that, one, people were talking so much, and, two, that this gal was making such a big deal about it. It just confirmed why I have no desire to cohabit or get married. I didn’t want to be brisk with her, because I think she felt like she was put in a bad place by her “friends” and colleagues, but she was making a problem for me that I did not invite. Get some new friends.

Anyhow, this wasn’t the first time that gossip reared its ugly head in my field. Hell, it wasn’t even the only time that weekend; fortunately the rest was reserved for others. And it surely won’t be the last. But damn, why do people feel the need to talk out of turn, to spread falsities and half-truths, to indulge their desires to be the person in ‘the know’? I must admit I’ve done it before myself, but the group I exchange these tales with are far less catty and judgmental. I was talking to one of my buddies after the conference, who incidentally also had some minor garbage said about him (and blown out of proportion) that we need to completely avoid these gatherings. He suggested finding “new weddings to crash.” Maybe he’s right. But then I’d cut off the only avenue to seeing some of these folks that I don’t get the opportunity to see otherwise, and I don’t want to do that. So maybe I have to behave myself and be a stick in the mud; but then what’s the point of going?

I guess I’ll just have to stick with the chickenheads clucking along. Eventually I’ll become known for the debauchery and sordid tales that people whip up about me, so maybe I better just embrace them and become the hellraiser they paint me to be. I guess it’s another route to making a name for myself in the field, no?