When I was a kid I used to love to go to garage sales with my grandma. I think it was in part because I knew I’d always walk away with some score, so it was a surrogate for going to the toy store. In our society we teach our young to be materialistic very early; it is engrained in every aspect of our being and interactions – which fittingly should be called transactions; every aspect of our humanness is a bartering process. It’s sad, really. Anyways, as I’ve aged I often look at yard sales and garage sales as an easy way to get rid of the crap we don’t want; which is a good thing if only it didn’t mean we went on to buy more crap we’ll eventually not want.

I’ve moved around a lot, and I’ve accumulated a lot of crap. Sure, most of it I ascribe some meaning to, much of it is derivative of some experience, but most of it stays boxed, un-reflected on. I guess that’s okay, but whichever poor sap gets charges with exhuming my crap when I’m dead and gone will likely have to sort through it, trying to make meaning of it, keeping it to add to their collection, further removed from the initial point. We’re very good as a society at giving things meaning, but we’re very bad at understanding other’s meanings. But if I’m being honest, whomever is charged with cleaning out my place after I pass will likely just throw it all in a dumpster, that is, of course, unless they expect to find some treasure that they can make money off of. One man’s trash is another’s treasure, after all. But before we drift too far out to sea, let me return to my point: knickknacks and trinkets are everywhere, and we’re fast approaching the “season” where they are wholeheartedly embraced. It’s sickening. But it isn’t just a holiday problem, it is an everyday problem. Let me illustrate.

I’m very lucky to live next to an interesting area of commerce. I don’t frequent it too much, but there are a few restaurants, a few bars, a coffee shop, and some other quaint places that give the neighborhood some character. Well, on Saturdays, they have a “farmer’s market,” only that isn’t entirely fair, at least not in how I would assume or define a farmer’s market to be. Sure, there are some fruits and veggies (few and far between), some meat and eggs, but most of the edibles are baked goods, canned goods, and the like. What is more prevalent, and seems to be the bulk of the “farmer’s market,” are trinkets and knickknacks. Magnets, handknit scarves, “art,” homemade cutting boards, and other B.S. that has nothing to do with a farm or eating. When I think of a farmer’s market, I think farm to table; everything I get there should be edible and removed from factory farming or corporate influence. Instead, at this rendition, I find trinkets and knickknacks. Sure, there are other homemade necessities like lotion and lip balm, but more often than not these “necessities” are overpriced and undersized. You pay $10 for a 2 oz. tube of lip balm that melts in your pocket the first day it gets over 75 degrees. But hey, you’re supporting the local economy, right? So I won’t gripe about that kind of stuff too much here, but some of the rest of the garbage is an assault on humanity. Don’t make me feel bad because you waste your time making garbage and want to fleece me for something I don’t need. I guess that’s why I avoid this corner market more often than not; it is against the ethos of what I think a farmer’s market should be. 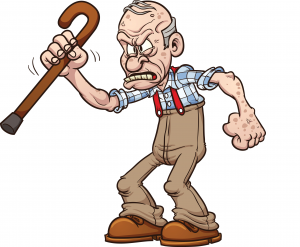 Do what I say! I’m confused about what I want! Is this as good as it gets?

My neighbors a few houses down had an “art in the yard” event today. She’s a potter or ceramicist or something, and while her crafts are nice, I don’t quite get it. They have an awful nice house with two external buildings, one a great enclosed cabin-esque porch, and the other a studio. She also has a storefront, so obviously someone is buying this stuff. Don’t get me wrong, it’s well done, but it is the epitome of crap no one needs. Really. Not that you shouldn’t be able to spend your money on whatever you want, lord knows I’ve wasted a good deal of money on dribble in my day, but I went to this event and knew I would be threatened with sales pitches and self-pity from the “artists” who were participating. There was some guy selling these overpriced wallets (for lack of a better term) for notebooks. While neat, I couldn’t fathom why I needed a $25 leather binder for a $1 notepad I don’t even have or want. He even admitted some flaws in it in terms of how it will fall apart when it ages, but nevertheless he persisted. Someone else was selling hand-dyed scarves, another was selling some sort of turquoise seashell pendants that looked so dysfunctional they couldn’t last more than one wear without causing major frustration and ending up in the trash. Everywhere I looked there was stuff that I would never need, that nobody would ever need, yet the suckers kept strolling in, one by one, to waste their money on “art.”

The quandary is that I appreciate that these sorts of things go on; the farmer’s market and the art in the yard sale. It gives neighborhoods a little bit of character, makes people feel some charm about a place, makes people feel connected to others in some strange way. I get that. I like that. But I’m also put off by it. In fact, the day before, there was a neighborhood potluck of sorts. It was an annual tradition and despite the bad weather, folks still came out. I appreciated that too. But I left after about 10 minutes. That’s generous. I left after about five minutes. I walked up, knew I wouldn’t like it, dropped off the dish I half-assed, faked a phone call, and bailed. Nobody would know – or care, but I just didn’t have it in me. Now this was not focused on trinkets and knickknacks, so my argument against that falls apart here. In fact, it embodied all of the good things you’d hope to find in a tightknit community. I think the issue was, for me, that I don’t really know any of these people, it was primarily families with young kids, and this isn’t something I would script for myself as something to spend my time doing on a Saturday. But it had good intentions and spirit. I just had a hard time buying into it, I guess.

I think the problem is that I look for excuses not to engage. I’m an existential misanthrope, apathetic, and critical, always have a reason not to do something, and have learned how to squirm out of reasons to do something. Not ideal, not what I would have envisioned for myself. But at the same time, I also think that because I’ve become hypercritical of society, I default to all the bad things about it. So instead of taking the chance to make and build relationships, and appreciate the unique aspects of the community that I’ve entered into, I stay on the periphery, casting stones, buttressing my stance as rational and true simply to protect myself from having to make any effort. It really is what I rail against. I guess I’m a perfect case of, “do as I say, not as I do.”

So it likely has nothing to do with trinkets, really, though buying for buying’s sake does make my skin crawl sometimes, it’s simply that I’ll find the excuse not to be engaged if I can. I’m a curmudgeon in the making, if I’m not already there. I know who I blame for this (yes, myself, but someone else, you’ll never know!), but it isn’t so bad that this is the way I am, but that it is the way I choose to be. I do believe we’re the author of our future, so because of this it is clear I’m writing a very solitary tale. I just paint it with self-righteousness about materialism and personal-responsibility in the civil sphere. The truth of the matter is, all the problems I theorize about solving could be slowly attended to if I chose to plug in and make connections. I think in part this has to do with the hardening of my exterior through experience, and a little to do with an innate social anxiety. The latter is actually easy for me to overcome – if I choose to. It’s just I rarely make that choice.

Back at those garage sales with my grandma, true I was being further indoctrinated into the materialistic culture, but it was also a way to engage with society, with people. As I’ve slowly extracted myself from those engagements, for whatever reason, however noble, I’ve made myself an outside critic, sort of like the old men in the balcony on The Muppets. Only far less entertaining to anyone other than myself. Trinkets and knickknacks, while worthless, objectively, are extensions of people, and opportunities to find common ground, learn about others, and build relationships. Unfortunately I’ve removed myself from the market of social exchange.