“You can’t always get what you want.” Life is all about anticipation and expectations. Sometimes when you know exactly what you’re going to get, buyer beware. It just might come true. I went to see the Rolling Stones recently, after a quarter-century of enjoying their music, and well, I didn’t come away impressed. The thing is, I got exactly what I’d expected and nothing of what I’d hoped for. Hope springs eternal, as you’ve read here before… First, stadium shows are not to the benefit of the fan. When you put 50,000+ in an oversized outdoor arena, just general congestion, if nothing else, is going to make it challenging to truly enjoy yourself. These venues are not designed for audiophile listening, either. To be honest, the quality of the sound was reminiscent of a few speakers stuck out the windows of a frat house overlooking a college park where the bros are playing frisbee and crushing cans of The Beast; and the ladies are sunbathing, sapping all of their inner hydration only to replace it with booze later in the evening. The sound was tinny, distant, and while clear enough to make out the lyrics, lacked a sonic appeal to make you really feel it in your bones – the way a rock show should be. In fact, the focus was really on the video portion, five mega-sized monitors in the back of the stage that highlighted everything the boys (old men) were doing; most of it was unnecessary to see. Sure, Mick Jagger still has moves like, well, Mick Jagger, but at 75 or so, they’re inessential to the show. As are the wardrobe changes. But I get it, nostalgia rules the day.

I’d say a vast majority of those in attendance were 60+, which wasn’t too surprising. In fact, I’m glad to see people still going out to have a good time, especially as they creep up into their seventies and beyond. I hope I can still say the same about myself – if I make it that long. The band, well, they’re all in their 70s, too, and that is awesome in its own right. I think about all the times I’ve struggled to pick up an instrument (and abandoned just as quickly) and then look at these guys doing their thing, having made dozens of hits, just pushing through each song like muscle memory. It can’t be fun anymore, really. They can’t need anymore money, really. (I mean, 50,000+ fans at 20 concerts, tickets between $100-1,000 a pop; they’re getting filthy rich off of this…)

As much as I hate the term, this was a “bucket list” thing to do for me. After Prince, Bowie, Petty, and Lemmy died, I’ve been more conscious of seeing the bands that have been important to me in some way that I’ve never seen before (I’ve seen Bruce and Ozzy recently as well). But with that has to come a certain reality that they’re not going to capture their glory of the past entirely (though Bruce and Ozzy did pretty well). I mean, had it been possible, I would’ve loved to see the Stones in the 70s when they were no doubt at their height of creativity and energy – and excess. Rock n roll is a young man’s (or woman’s) game for sure, but that doesn’t mean the old folks can’t still rock – or enjoy the rock. I mean, a 70-year-old rocker was once a 20-year-old rocker, and I don’t think you lose it, even if you change in other ways. The whole riding a bike thing… 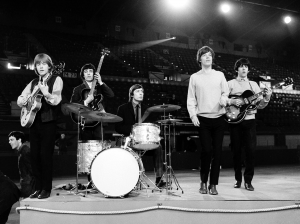 Nothing is ever the same as it once was.

I don’t regret going, but I don’t imagine I’ll seek out the Stones again. If they were to play smaller venues (which is unlikely), and leave behind the overplayed hits and go for the deeper cuts (they won’t), then there’d be some appeal. But now I can just say I was there. I saw the Rolling Stones.

But expectations and live music are an interesting pair in general. What is it that we’re really going to see when we go see a band play live? Confirmation of our tastes? The desire to share space with likeminded others? To hear how it’s “meant to be played”? Maybe all of that, I don’t know. For someone who sees 50+ concerts a year, you’d think I’d have an answer – I don’t. Why do I go to see so much live music? Somewhere in these pages I’ve written about this before. I’ve known people who have never been to a live concert, or at least not in years, if not decades. I’ve had people tell me that they own the album; why would they need to see the band live? It baffles me, though I can’t fully explain what I get out of it, or why I spend so much time and money chasing live music. It’s one thing to go down to the corner bar to see the local band play for free (which isn’t always worth it even with minimal energy/money invested), and another to fly across the country to see a band (especially time and time again).

I’ve often wondered if my seeing endless amounts of live music is a hobby, especially because it’s largely so passive. I mean, it’s not like I’m out there dancing and getting a workout. I mostly stand in the back where there’s a good view and the sound isn’t terribly deafening – this also allows for the quickest getaway after the last note. More often than not I go solo, largely because people are not as motivated to see obscure bands on Tuesday nights 90 minutes away, but also because all of my friends are old (lazy), married (are told what to do), and/or have kids (who ruin everything). I’m also not very good at meeting people at shows (though it does happen), but that’s largely because I’m there to hear the music, not chitchat. In fact, small-talk at concerts sucks. Stay home if that’s what you’re there for!

Back to the Stones’ show. I didn’t buy a souvenir t-shirt, something I’ll often do for smaller bands, if for no other reason than I like to support them – most bands struggle to get by, and no, your subscription to Spotify is not helping them. I did take a few pictures with friends, but those were free. I did enjoy my time with those friends, and we now have another experience to chat about together, even if it is mostly just bitching.

No one ever asked me, but I was thinking what five songs I would’ve wanted them to play had I had any say in the matter; they didn’t play any, of course. So, after the show I was playing some of those songs, either from the studio albums or remastered and hand-selected live cuts, and I wondered, would the band have been as good had they played any of those five at the show I was at? No, probably not. And I think that’s safe to assume or to know. I got what I expected at the show, but not what I wanted – but what I wanted hasn’t been available to me for several decades. “But if you try sometimes you just might find, you get what you need.” Or not.