I read somewhere that the only shortcoming dogs have is that their lives are too short. They really are. Those of us who are “dog people” invest an awful lot of time, energy and love in our furry friends, and continue to build that bond over the course of our shared lives. The thing we all sign up for, whether not we consciously realize it or embrace it, is that those pooches won’t be around for too long on the grand scheme of things. Sure, if we get ‘em as pups, and we’re lucky, we might get 12-15 years of great companionship (assuming nothing tragic intervenes), but for humans that regularly live until 80, that is but a fraction of our lives. So I often ask myself, are we simply setting ourselves up for unavoidable heartbreak? I mean, we know, in most instances, we’ll outlive our dogs, yet the desire to have that bond typically overrides the knowledge of their all-too-short lives. Thinking about humans, two-legged children almost always outlive their parents; for those who have lost a human child, it is devastating and forever changes the arc of life. I fully believe that many people can have just as intimate a bond with a dog as any human, but again, it is one that we know is ephemeral. While human-human relationships come and go, often the ones with our dogs just continue to get stronger as we age together. It just doesn’t seem fair that we have to let go after such a short period of time. 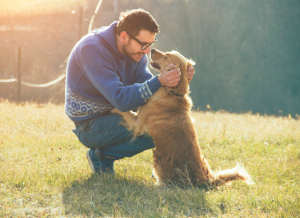 We see eye to eye.

I’m on the third dog of my life now, and she’s starting to get up there, but she seems to be doing okay. The older she gets, though, the more I’m faced with the reality that our time together keeps getting shorter. I think that’s why I’ve become even more comfortable as a homebody (my own aging likely plays into that as well). I cherish the time spent with her so much, even if we’re just lazing around, that I’m quite okay sacrificing many other social opportunities just to share her company. In fact, “sacrificing” is the wrong word: in many instances the other options rarely measure up to time with my dog; the sacrifice would be less time with her.

My first dog I got as a child, for my 13th birthday. I’d always wanted a dog, my parents never thought I was responsible enough to have one, yet finally they relented. I imagine in reality I still wasn’t responsible enough to have one then, especially since his total care fell on me (my parents paid for food and vet bills, of course), and as I look back on it I know I could’ve spent more time with him. However, he was an “outside” dog, and rarely let in for more than an hour at a time on select occasions, so I kind of blame my parents for not allowing me the opportunity to create a better bond. I mean, part of the fun of having a dog as a kid is lazing around: watching TV, listening to music, doing homework, hanging out in the bedroom together when you get grounded, etc. I was forced to sit in the backyard with him, in not altogether comfortable positions, so there was an obstacle to building that relationship. I moved out 4+ years later for college anyhow, and then he became my parents’ dog. I got the second one in college around 21.

Now, college isn’t the best time to get a dog. Most college kids really aren’t very responsible, I sure wasn’t, so dogs don’t get the attention they deserve. I think I did okay, though; I always made sure the dog got exercise, fed on time, was let out on a regular schedule, and of course I loved her; but looking back I wouldn’t advise most folks to get a dog during college. In fact, I think there should be some sort of test that anyone who wants a pet should have to pass. (The same should be true for having children.) I had that dog for more than 12 years, and our relationship grew and changed over those years as well. We lived a lot of places, I did a lot of things, but each passing day/month/year, she became more and more a part of my identity. Some of her challenging characteristics aside, she was received well from others and was always a reflection of beauty to those who saw her, up until her end. I always thought I’d take time off from having a dog after she passed, but serendipity reared its head and I almost immediately jumped into another canine companionship. It was one of the best decisions I’ve ever made. And here we are, almost 9 years later. In many ways I think we (me and Dog 3) picked up where we (me and Dog 2) left off: our relationship picked up at the best part in the relationship between me and her predecessor. I imagine, or hope, that will happen when I’m faced with looking for Dog 4 – though I hope that doesn’t cross my path anytime soon…

I read something in the old paper edition of the Mountain Gazette (now defunct, I believe) a while back by the editor M. John Fayhee about how you only get one truly great dog in your life. Of course there’s no way to verify that claim, at least not until we run the course of our life with dogs, but if it were true, I know that “one great dog” wasn’t Dog 1, and as much as I loved her, it wasn’t Dog 2 either. But it might be Dog 3; we’ve got a special kind of bond, we’re truly in tune, we trust each other significantly in a variety of different situations. She has very few characteristics that are undesirable, really none, to be honest. Dog 1 was stupid. Dog 2 was very standoffish with strangers and didn’t like other dogs. Dog 3 is calm, yet can get excited quite easily in the “right” situation, whether it be with me, another dog, playing with herself, or another human she loves. She pays attention and is focused on me and my signals to her. She’s as sweet as they come, and smart as a whip. Aside from case of anxiety that shows up every now and again, and the incessant desire to bark at whatever comes to, or near, the front door, she’s an ace. I have to admit there’s a number of qualities that she has that I hope a distant future dog will have, but sometimes you just don’t know what you’ll get. I hope when that time comes (please, please, please, not for a VERY long time!), I’ll get lucky again. I never get lucky, or at least don’t feel I do. But with Dog 3, I sure as hell did. Very lucky.

I don’t travel internationally for a few reasons, but chief amongst them is that I don’t like to leave my dog behind for long periods of time. To go anywhere outside the US, and to make it worthwhile, you’re looking at a minimum of a week, and in most instances, 2-3 weeks. It isn’t that she couldn’t handle it, though I know she’d be really bummed out, and it isn’t that I can’t handle it, though I know I’d miss her significantly, but it’s more that we’re quite content together, so why buck that? I still travel inside the country frequently, but rarely more than 4 nights at a time. I guess now that I write this, I feel as if I’d be abandoning her to go any longer, and if I’m being honest, maybe I couldn’t handle it. Now that we’re likely in the home stretch of her life, I just can’t imagine sacrificing any time with her to do something indulgent in such big chunks. Maybe in another life I’ll see the world.

It’s been said before by many, but my dog is my kid. If you really love your dog, I’d argue that the relationship between a human and a dog is the most fragile in the world because of their all-too-short lifespan. We enter into a contract to take care of and love one another, and while that is true of human offspring, dogs don’t ever get to the place where they can take care of themselves. Dogs don’t ever want their independence from their human(s). Dogs need you more as they get older, humans don’t. And dogs look at you the same on Day 5,000 as they did on Day 1. We’re lucky to have them, I wish everyone felt that way.