I claim to people that I’m a recluse, albeit one that can be very social. In fact, sometimes I darn right crave socialization; I imagine most of us do at some point. But a true hermit doesn’t, so I guess I’m not there – yet. Though I do wonder if it is on the horizon for me… Having said that, and back to my point, I do consider myself to live on the periphery of society. I poke my head in when necessary, but mostly I like to stay on the outside looking in. To do that, though, one has to have a sanctuary that is comfortable to them as much as possible. I have a house, and I enjoy it a lot, but it is not to the point of sanctuary status that I would like it to hold. Because of this, I’m working on walling off my neighbors and building a figurative moat with no drawbridge. 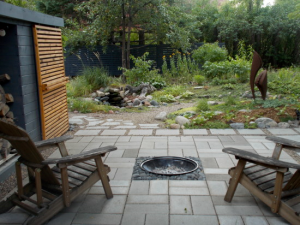 Thank you for leaving me alone.

I spend a lot of time in my house, both indoors and out, and I need the sum of the dwelling to be accommodating to my style and needs. This means I have to have numerous options for relaxation-inducing environments, not to mention a few places where I can really get some work done. Unfortunately, I live in an urban area, so I don’t have the kind or amount of natural space surrounding me that I’d like, so I’m forced to make the best of what I do have available to me. In my case it means that I have to cultivate the confines – and the abutting terrain – to my needs and liking. I love green space and trees, so I’m working to make those both more appealing and more plentiful. Recently a lot of my neighbors have cut down their trees, some for tree health and safety issues, others for aesthetics (why you would ever cut down a healthy tree is beyond comprehension for me), so I’m hopeful to add several more squirrel homes to my spread. I’m also the owner of a rickety fence, and while it does its job of keeping the dog in and others out, it is worn-down and not completely private. I need a proper fence, 7-8’ tall to keep folks from peering in on what I’ve got going on. I also want to adorn it with some original artwork, making it sort of a gallery on the outside.

I also have an electrified shed that I want to turn into a studio of sorts. If it were slightly bigger and had water running to it, I’d make it a guest house. That way I could still put up a façade of liking people by hosting them, but I could keep them out of my personal space. Alas, the shack won’t accommodate that… Nonetheless, it could make a cool creative space, a social space for food and drink if I ever were to make the egregious error of having lots of people over; the possibilities are endless. The only certainty is that it needs to increase my comfort level. Related, I’m covering my patio to an enclosure of sorts, making for an all-season, hybrid indoor/outdoor space to view and be in nature, whether it be for work or for leisure. It’ll keep the bugs out and the breeze flowing. It’ll be a good addition. This is, of course, in addition to the garage, a place where my car and supplies are tucked away, thus not signaling to anyone whether or not I’m home. Strangers are the worst. I’m not a big fan of the drop-in, so this helps to discourage anyone who might be in the area and thinks it’s a good idea to pop in.

And the inside, well that is the most important part, I guess (though I do prefer to be outside). It’s pretty good so far, has my books, stereo, TV, and plenty of places to sit or lounge. It is out of direct sunlight, for the most part, so it doesn’t get too hot in there. I do long for the fall and winter when the windows can be open; a cool, natural breeze is quite inviting. I wish that were available year round. The dog is well catered to also: she has no shortage of places to plop down, and she, of course, has her favorite routes inside and out, as well as her favorite places to curl up, stretch out or run around. My abode has a connected front and backyard, so that encourages her to run to and fro, all the while getting in a little extra exercise. I need something like that as well. I guess that’s why I’m left dreaming about having my own spread of acreage in Colorado – 5-10 would be nice, and definitely off the grid. Any opportunity to withdraw from society is a good one. I’m not sure I want to be much a part of the one we have now, anyways…

I once “designed” in my head the place I’d love to build if I could. It would be a one story, three-bedroom house that is done in “great room” fashion. It would almost be like a yurt, or possibly an ice cream cone with an outward-bulging curved top. On the front side there would be a covered porch; on the inside would be a master bedroom with an attached bathroom on one side, and two rooms separated with another bathroom on the other. One would be a library and study with massive bookshelves from floor to ceiling and one of those sliding ladders that’s goes around it. Of course I’d have the books to fill it. The other would be a TV room. I don’t like having TVs be the central part of a living area. The great room would have the kitchen and dining area, as well as the entertainment area, complete with stereo and numerous options for comfort and lounging. To the left of the main structure would be a driveway that leads to a 2-3 car garage with a carriage house above it; a self-contained room that guests could occupy, complete with kitchenette and washer and dryer. It would have a nice balcony so they could rest outdoors. The third and final structure would be a study where I would do my work. Slightly smaller than the carriage house, it would also host a loft where an overflow guest could stay – if necessary. It would have a wraparound spiral staircase on its outside that would go to a nice viewing area. Maybe there would be a telescope, but definitely it would host a clock tower. I love the chiming of a carillon. All three structures would be connected by a covered, screened-in, wraparound walkway that would conceal a courtyard in between the three buildings, replete with big shade trees. I imagine a quarter acre would be nice for the green space. That would be my true sanctuary…

But that ain’t gonna happen anytime soon. Or maybe never. So, I work with what I have, and I build my second choice sanctuary to fit the space I have. I also envision extending my front walkup into a covered porch and entryway, but the problem with that is that it would require me to interact with my neighbors more, something I’m not looking to do. Don’t get me wrong; for the most part they’re great and leave me alone. I’m just not looking for any more small talk than I already get. That is, unless, they’re pretty neighbors!

So if you’re looking for me, don’t. I don’t want to be found. Once my sanctuary is complete, you won’t find me. Sure, I’ll have to venture out into society from time to time, but whenever possible, I’ll be tucked away, thankful that I had the opportunity to create a space away from all of you. If you’re lucky, maybe I’ll have you over – that is if you bring over some sustenance and other necessities and it saves me from having to go out into this world.