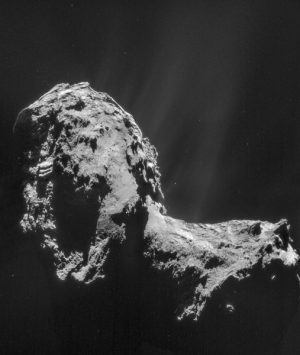 This image of comet 67P/Churyumov-Gerasimenko is a composite mosaic of four images with a resolution of 10 meters. (Credit: ESA/Rosetta/NAVCAM, CC BY-SA IGO 3.0)

Whether our species survives long enough to accomplish long-term space travel and habitation is questionable. Assuming we don’t destroy ourselves before then, imagine a future where we can land on asteroids to perform mining surveys. You step out of your spacecraft onto the porous surface of comet 67P/Churyumov-Gerasimenko, look out on the horizon with your ultraviolet goggles, and catch a glimpse of something you’ve only seen on Earth – an aurora.

Researchers have seen the glow coming from comet 67P/Churyumov-Gerasimenko (67P/C-G) and long believed it was photons of light interacting with the surrounding gas. After collating data from the Rosetta mission, they now believe the glow comes from electrons streaming into the solar wind. Charged particles from the Sun interact with the coma, the gas surrounding the nucleus of the comet, creating an aurora in the far-ultraviolet, hence the need for your futuristic goggles.

The ultraviolet portion of the electromagnetic spectrum is outside our ability to see with the naked eye. These wavelengths are shorter than the ones found in the visible spectrum, compared to infrared wavelengths on the opposite side of the spectrum, which are longer.

It’s a fascinating discovery and will help researchers better understand space weather. Solar winds change as they move through space and objects like 67P/C-G; they also effect Earth-based systems. As we travel further into the Solar System, predicting space weather will become increasingly more important with the absence of a magnetic field to shield us from the brunt of solar winds. The Rosetta mission continues to shed light on the comet. Though the Philae lander was briefly operational, the orbiter continued to collect information on the comet until the mission ended on September 30th.

The ultraviolet portion of the electromagnetic spectrum is invisible to the human eye.

The orbiter was sent on a controlled impact into the Ma’at region, giving the research team close up views of pits with active dust jets before impact. We won’t see these images for some time, but we can rest assured the Rosetta Mission provided researchers with copious data that they’ll be sifting through for decades.