Computers are neat, and so are scientists. Both are specialized, but one is short on nuance, the other on time, and this is where crowdsourcing saves the day. Volunteers have discovered 95 cosmic neighbors in nearby systems. These objects, known as brown dwarfs, are larger than planets but smaller than stars, without enough fuel to power themselves. Brown dwarfs can be hot, but these newly discovered brown dwarfs are cold, some as cold as Earth and they could even have water clouds. 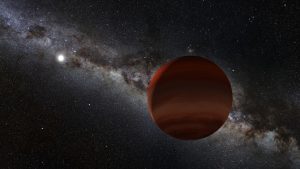 This artist’s depiction shows a white dwarf in the background and a newly discovered brown dwarf in the foreground. (Credit: NOIRLab/NSF/AURA/P. Marenfeld. Acknowledgement: William Pendrill)

Their small size and low temperatures make the brown dwarfs difficult to detect, but they emit light in the infrared portion of the electromagnetic spectrum. Even these emissions are faint, limiting the discoveries to our closest neighbors. For scientists, these new discoveries help fill in the gaps in the brown dwarf population. Planets may follow the same physical process as brown dwarf formation, giving researchers greater insight into planet formation in our solar system and beyond.

NASA funded the citizen science project, Backyard Worlds: Planet 9, on the Zooniverse crowdsourcing platform, to collaborate with the public. Volunteers worked with scientists to identify these previously undiscovered brown dwarfs using data from NASA’s Near-Earth Object Wide-Field Infrared Survey Explorer (NEOWISE) and the Sptizer Space Telescope. Volunteers looked at a series of images to find moving objects in the infrared spectrum. With all the noise and the plethora of celestial objects getting in the way, the work was too fine-tuned for a computer. There is no substitute for the human eye and brain when it comes to object classification. Thanks to the volunteers, 95 of these objects were discovered and can now be pinpointed for further investigation, especially when the James Webb Space Telescope goes online. In the initial study, twenty of the citizen scientist hailing from ten countries were listed as coauthors.

The Backyard Worlds: Planet 9 project is ongoing, so don’t fret, you can still join in the fun. Not only are they looking for brown dwarfs, they are rooting out other celestial neighbors like low-mass stars and planets. Scientists believe there is a hidden planet beyond Neptune based on the orbits of Kuiper Belt Objects. Research suggests NEOWISE has already captured an image of the mysterious planet, but has yet to be found in the immense amount of data. This is your chance to discover the ninth planet, so get in there and help unravel the mystery!