NASA’s Discovery Program aims to further our understanding of the solar system and its implications for our own planet. Through this program, NASA awarded four missions $3 million each to continue nine months of research and development. Next year, NASA will select up to two missions for further funding and development to get them off the ground. 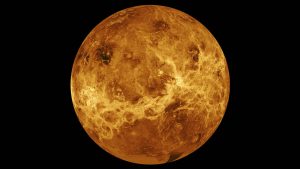 This composite image of Venus is 30 years old, the last time a probe ventured to Venus. (Credit: NASA/JPL-Caltech)

Venus is getting attention from two of the planned missions. Venus may not seem like an obvious choice, when Mars – a planet that looks like our own and with less brain-frying radiation – is within reach. However, Venus may have looked very similar to Earth in its distant past, with water and a strong magnetosphere, but the planet changed and descended into a killer greenhouse effect. Venus rotates once every 243 Earth-days and in the opposite direction of all other planets in the solar system. Some researchers postulate that a giant asteroid crashed into the fledgling planet and threw it off course while others point to tidal locking with the Sun. Was it a massive impact or the natural progression of a planet lacking the specific ingredients to maintain an atmosphere and harbor life?

These two missions aim to find out. The first, called DAVINCI+ (Deep Atmosphere Venus Investigation of Noble gases, Chemistry, and Imaging Plus) – that’s a mouthful – will send an instrument through the noxious gasses and toxic atmosphere, where it will gather information on the terrestrial planet’s composition and formation.

VERITAS (Venus Emissivity, Radio Science, InSAR, Topography, and Spectroscopy) – enough with the acronyms already – is the second Venus mission. This one is an orbiter with a synthetic aperture radar that can see through the deadly clouds to the planet’s surface, where it will map elevation looking for evidence of plate tectonics and active volcanism. Researchers know Venus saw intense volcanic activity in the past but are unclear if the domes continue to spew. There is some speculation that volcanoes, especially Venus’ tallest volcano, Maat Mons, are still active, but we lack strong evidence to back up this theory. VERITAS will answer these questions and glean information on the geological composition of Venus from infrared emissions.

The Io Volcano Observer (IVO) mission will fly by Jupiter’s volatile moon Io. Constantly under pressure from Jupiter’s gravity, it’s covered in active volcanoes and researchers want a closer look. The Trident mission is aiming for Triton, the remote moon of Neptune. Its atmosphere has potential for interesting characteristics, like organic snow and a subsurface ocean. All these missions have great potential to unveil mysteries of our solar system and planet formation. May the best mission win!