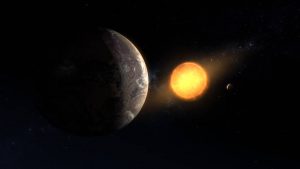 Let’s get hypothetical. All theories start with the hypothetical, then tests are devised around this assertion to infer whether the idea is true or prove that it’s false. The question of life — where it came from and how — is steeped in endless theories from the divine to the insane. Somewhere in the middle you’ll find science. Researchers from the University of Tokyo hoped to probe one theory on how life might have made it to Earth by modeling the life cycle of abiogenesis.

Let me back up, abiogenesis asserts that life started in a universe dominated by RNA, the less complex precursor to DNA. This RNA came together via long chains of nucleotides strung together by chance. This has been difficult however to replicate in a lab, so researchers used a conservative method of creating RNA strands for the model. It also included estimates of the number of stars and habitable planets in the observable universe where these nucleotides would have originated from. Using these two principal factors they ran an algorithm to estimate the likelihood of abiogenesis occurring throughout the universe. The results weren’t encouraging. It’s unlikely abiogenesis would have occurred on Earth in the timeframe life is presumed to have reared its head here, but that’s not the full story.

The results change if they took into account what’s outside the observable universe, since it’s generally believed that the universe went through rapid expansion right after the Big Bang; and so there were many more stars and habitable planets that we couldn’t see. Using this new model, it’s much more likely that life on Earth could have formed from this process. It does however cut down on the idea that other life exists in the observable universe. 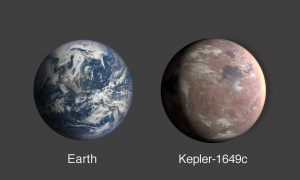 Kepler-1649c stood up next to Earth, only 1.06 times larger than our home planet. (Credits: NASA/Ames Research Center/Daniel Rutter)

So far, with the research from Kepler, the Transiting Exoplanet Survey Satellite (TESS) and other planet hunting missions, we have yet to find a planet like ours. A recent discovery from archived Kepler data illuminated a planet that had been overlooked. Kepler-1649c orbits a red dwarf 300 light-years from Earth. It’s similar in size, 1.06 times larger than Earth, and is believed to be rocky. It gets 75% of the light from its host star compared to the Earth and the Sun. Red dwarfs are notoriously volatile, so while it comes close to Earth in many ways, the conditions on the planet might not be ideal for life to thrive. Kepler-1649c orbits much closer to its star, making its year 19.5 days on Earth. Life may not be as abundant as it appears from down here.

There’s much out there that we can’t see, and deeper knowledge of our origins is out of our grasp at present. As technology advances and our ability to test our theories grows, we may uncover more truths and with it, more mysteries.