You may have noticed Google’s doodle on July 20, 2020, a nod to Turkish astrophysicist, Dr. Dilhan Eryurt. Let’s look closer at her career and contributions to astrophysics.

Born on November 29, 1926, in İzmir, Turkey, Dr. Eryurt grew up in Istanbul and then Ankara before attending Istanbul University, afterwards receiving her doctorate. She opened an astronomy department at Ankara University and won a two-year scholarship in Canada at the International Atomic Energy Agency in 1959, where she studied computers to aid in her research. From there she went to Indiana University to work on the identification of stellar models — the internal structure and evolution of stars — with the Soroptimist Federation of America. 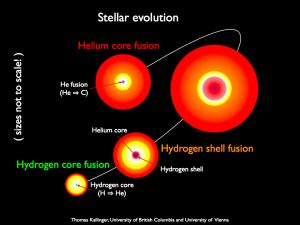 An example of a simplified stellar model, showing how the internal star structure evolves. (Credit: Thomas Kallinger, University of British Columbia and University of Vienna)

She went to work at NASA’s Goddard Space Flight Center in 1961 as the only female astronaut at Goddard at the time. This is a confusing picture, there were other female astronomers working at NASA, though not at this facility, and there were other female employees, but not employed as astronomers. This is hard to verify as NASA has no information about Dr. Eryurt on their website detailing her time and work with the institution or her outstanding achievements.

Her research at Goddard changed how astronomers understood the evolution of our sun. Previously convinced our star was growing hotter over time since its formation 4.5 billion years ago, Dr. Eryurt hypothesized the Sun was cooler and dimmer since its inception. During the Apollo 11 mission, her research uncovering the solar impact on lunar conditions was crucial to the success of the mission and earned her the Apollo Achievement Award in 1969. She continued to work at Goddard as a senior researcher. In 1968 she organized the first National Astronomy Congress in Turkey with the support of the Scientific and Technological Research Council of Turkey (TUBITAK).

She continued to study star evolution while at the Middle East Technical University in Ankara Turkey where she founded the Astrophysics Branch of the Physics Department in 1973. Dr. Eryurt published papers on the Advanced Evolutionary Phase of a Pirst-Generation Star in 1981, detailing the composition and progression of first-generation stars. In 1989, she co-published a paper on the Evolutionary Status of the Primary Component of Yz-Cassiopeiae. These are just two of over a dozen publications she authored. Her career continued to be exceptional, awarded the TUBITAK Science Award in 1977 and chair of the Physics Department in 1988, she became the Dean of the Faculty of Science and Letters before she retired in 1993.

At the age of 86, she passed away from a heart attack on September 13, 2012. Her research continues to inform our understanding of star evolution and formation