Out of This World – Transformers on Mars

DuAxle might not be as cool as the blockbuster movie, but it’s a real-life transformer. Exploring the tumultuous terrain of Mars is a tricky task and rovers can easily get stuck, especially on steep terrain. Craters are a hotbed of geologic information, making them a preferred exploration destination, but the high sides and rubble increases the odds the rover will get stuck and there’s no AAA in space.

Watch the DuAxle in action as it descends a steep slope and is reeled back to safety. (Credit: NASA/JPL-Caltech)

Enter NASA’s DuAxle, a transforming rover made for those hard-to-reach places. The back axle works as an anchor, letting the front axle detach and roll onto uneven terrain, while still attached by a tether. The tether lets the front wheels descend at a controlled rate, instead of careening down the side of a cliff. When the front axle is done exploring or gets stuck, the tether reels it back in. Think of it as fishing for Martian rock.

When combined, the two parts look like a standard rover, with an anthropomorphized set of cameras sticking out of the top. The front axle has its own stereoscopic camera and a robotic arm to collect samples. The DuAxle allows the rover to collect samples in areas where Mars’ satellite images have detected seasonal briny water flows down steep embankments. 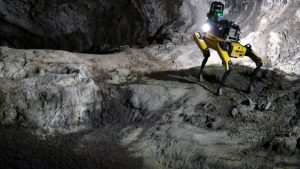 Artist’s rendering of the Mars Dog checking out a cave on the red planet. (Credit: NASA/JPL-Caltech)

While craters and rough terrain are difficult obstacles, another challenging problem is exploring caves on planets like Mars. In a cave, an autonomous vehicle needs to make decisions on-the-fly based on its surroundings. Cut off from real-time directions, the rover will have to rely on its own intelligence to explore and get back safely. This is where a dog comes in handy. No, not Pluto, but a dog-like explorer called AU-Spot. NASA and JPL-Caltech presented their new rover idea at the annual meeting of the American Geophysical Union (AGU). Unlike the DuAxle and other wheeled rovers, AU-Spot walks on four legs and nothing can keep it down. If it falls over, it can stand back up again. Compared to traditional rovers, AU-Spot is much lighter and moves faster across uncertain terrain.

NASA/JPL-Caltech is using a robot designed by Boston Dynamics and retrofitted it for a new life as a Martian dog, sniffing out possible future colony sites. Radiation is an ever-present, if mostly invisible, danger on Mars along with terrible dust storms. The cheapest and most effective way to mitigate radiation and avoid storms is to create habitats underground. AU-Spot relies on artificial intelligence to navigate unknown spaces. An onboard camera maps the rover’s surroundings, and the AI helps it avoid obstacles and choose the best path forward when presented with multiple options.

As always, scientists are on the lookout for signs of organic processes and past life on the red planet. The AI will have to decide what’s of scientific interest and watch its steps as it navigates new territory.