Out of This World – Time Travel

That’s a misleading title — we aren’t actually going back in time. Instead, we’re looking at a solar system at an earlier stage of development than our own. In an astronomical first, the European Southern Observatory’s Very Large Telescope (VLT) in Chile’s Atacama Desert imaged two planets orbiting a younger version of our own star. While researchers have detected thousands of planets by measuring the indirect effect they have on their host stars, this is only the third time they have imaged a solar system with multiple planets and the first with a Sun-like star. 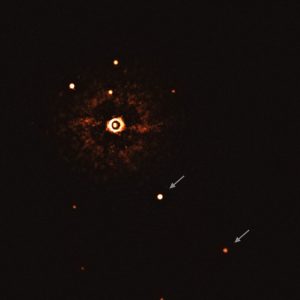 Feast your eyes on the first image of two planets orbiting a star the size of our sun. (Credit: ESO/Bohn et al.)

The system is in the southern constellation Musca, 300 light years away, and creatively called TYC 8998-760-1. The star has a similar mass as our own, though there are always uncertainties at such a distance, but is only 17 million years old. 17 million may not seem young but compared to our sun at 4.5 billion years old, this star is a veritable baby.

The VLT has an instrument called the Spectro-Polarimetric High-contrast Exoplanet Research instrument (SPHERE), that blocks the light from the central star which would normally obscure the orbiting planets. What they found were two giant plants orbiting a great distance from their star. The closest planet’s mass is 14 times larger than Jupiter and orbits the star at a distance of 160 astronomical units (AU). Just one AU is the distance between the Earth and our sun, so the planet is 160 times further away from its star. The second planet is six times the mass of Jupiter and is a whopping 320 AU from its star.

Many unknowns surround this solar system. Researchers want to know if there are more planets orbiting the star, including rocky planets like our own. With any luck, new and more advanced telescopes from the James Webb Space Telescope to the European Extremely Large Telescope will some day delve deeper, and with more minutiae, into this newly found system and see if it bares greater similarity to our own system. As it stands, the TYC 8998-760-1 solar system demonstrates that a star like ours can form very different systems.