Out of This World – Sustaining Life in an Inhospitable Environment

The International Space Station (ISS) is a unique environment that facilitates and extends scientific research in space. Recent on-board experiments have looked at the future of space exploration and long-term travel in deep space. Newly publish papers demonstrate the technological and scientific developments necessary to sustain life in an inhospitable environment.

Water is a precious commodity on Earth and even more so in the dark reaches of space. Deep space flights will rely on 98% water reclamation to sustain astronauts on their journey. The ISS has an environmental control and life support system that includes the Urine Processor Assembly (UPA) and can recover nearly 94% of water. Researchers believed the UPA could increase efficiency and reclaim more water from brine waste, the byproduct of urine processing. They installed the Brine Processor Assembly (BPA) and plan to return five sample bladders of reclaimed brine water to Earth for verification. So far, the BPA appears to be functioning as planned, rescuing water from the environment for human consumption. 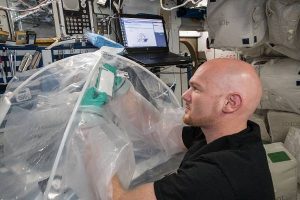 Realistic solutions for habitation on the Moon and Mars will rely on transporting as little construction material as possible. Researchers have speculated on the possibility of using the Moon’s regolith to create cement building blocks. The theory was put to a preliminary test using lunar regolith simulant (JSC-1A), a mock up of lunar soil with similar properties and consistency. The first tests were performed on Earth with success before they were moved to the ISS with the Microgravity Investigation of Cement Solidification (MICS) study. Researchers found fine lunar soil works as a stand in for cement while coarse soil works as a filler. Together, the mixture creates an effective mortar and may be the solution everyone was hoping for. The experiment also noted the structural difference of the mock lunar cement when created in microgravity. It trapped more air and created long lines in the microstructure versus the cement made on Earth. This information will help researchers model the cements behavior under different circumstances and environments.

These hypothesizes were a long time in the making and went through intensive studies to make it to the ISS. They might not be new and shiny, but their continued success and development is a testament to researchers’ commitment to the long game and the rigorous nature of their work. Next month, we’ll look at growing plants in space, deep space communication, and mitigating radiation, so stay tuned!