Out of This World – Small-Scale Breakthroughs

There are some technologies that feel too much like science fiction for people to wrap their heads around. Genetic engineering and nanobots are just a few examples of current innovations that have made giant leaps from sci-fi to real life.

Researchers at Cornell University have released genetically-modified Diamondback moths into a field to curb the insect population largely considered a pest to crops. These moths have a gene that causes female offspring to die in the caterpillar stage and the male offspring live to repeat the process, reducing the overall population until the gene disappears over several generations. 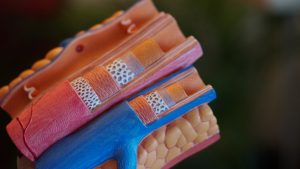 Model of arteries connected to the human heart Credit: Unsplash

A similar study was done with mosquitos and failed to have a long-term change in the population; and further, may have made the resulting mosquitos more robust. Though there is much controversy over the article’s publication. The list goes on, with cattle genetically modified to produce plasma for humans, to protecting dying species of chickens, and to reconstructing skin for people with genetic disorders. It’s everywhere, but most people don’t understand how this will shape our future. On one side, it’s leading to incredible advancements in the medical field. On the other side is the vast unknown of genetic modification and where it can go wrong, and if it goes wrong, will it be too late to do anything about it?

Robotic nanoparticles are another strange yet prevalent technology flooding a variety of fields. Chiefly, the medical field is awash with ideas on how nanoparticles can improve treatment. A recent study uses nanoparticles to eat away at deadly arterial plague buildup. These particles rely on highly selective nanodrugs capable of targeting specific cells and consuming them. Researchers can apply the same treatment to fighting cancer. Another set of researchers has created DNA origami, a process that uses DNA to build structures. They designed the DNA to transport cargo, like a crane that can fit in your bloodstream. These modified structures could sit in your body, waiting for a specific trigger to set them to work, creating their own molecules from surrounding materials to deliver drugs to the body after injury.

As with genetic modification, there come the ethics questions. Are we vigilant enough to anticipate problematic applications of this technology? What if someone trains these nanobots to destroy healthy tissue or they learn to do so by accident? It’s difficult to stop something that’s too small to see. Both these advancements are evolving at break-neck speed, faster than science fiction can keep up. Are we ready for a future that is changing the world at its very building blocks?