Out of this World – Light or Lack Thereof 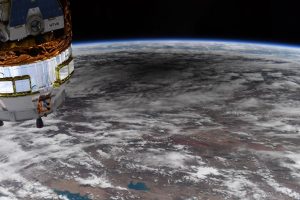 Light defines us, in more ways than we often imagine. This month we are looking at light in many unique forms, from our vantage in space and on the ground.

The continents of Africa and Asia had a phenomenal view of a solar eclipse on June 21st. While North America wasn’t advantageously situated, the astronauts aboard the International Space Station (ISS) got a singular view of the Moon creating a shadow over Earth as they flew above China.

This view of the Moon blocking the Sun’s rays to Earth is a fascinating perspective. NASA has also been collecting images of the Sun with their Solar Dynamics Observatory (SDO) for the last decade, amassing over 425 million high-resolution images. The mission has deepened our understanding of the Sun, it’s volatile nature, the switching of the magnetic poles and how this affects Earth. To commemorate the decade of observation, NASA put together a video using one image taken every hour, condensing the entire archive into an hour-long movie. They even have a custom music track by musician Lars Leonhard. While watching the sunspots flare up and ripple is impressive, they can cause disturbances to Earth systems including power grids and communications, and they follow an eleven-year cycle of activity.

It might be an hour long, but it’s a fascinating ride into the last decade of solar science.

Researchers captured a flash from an unexpected event, the collision of two black holes. Until the Laser Interferometer Gravitational-Wave Observatory (LIGO) was operational, researchers hadn’t detected black hole collisions. On May 19, 2019, LIGO detected gravitational waves, signaling the collision of two massive objects. Later, the Zwicky Transient Facility (ZTF) observatory captured a flash of light. After comparing the two signals, researchers realized the flash came from the same part of the sky. Black holes, as indicated by their name, don’t let light escape, so where did this light come from?

Researchers believe the light wasn’t from the merger, but after the merger when the black hole was sent flying through the surrounding gas in the accretion disk, producing a flare. There’s no certainty with this hypothesis, but it’s their best guess.

Light is both illusive and yet ever present in our lives. These images and readings help us uncover the mysteries of our own Sun and distant stars.