Out of This World – Downsizing 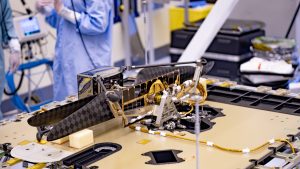 The Mars Perseverance rover is equipped with an advanced, drone-like helicopter. (Credits: NASA/JPL-Caltech)

For decades, humans have super-sized everything they could get their hands on, from French fries to rockets to double-decker planes. In recent years, we’ve seen a shift to the micro- and even nano-level in design and manufacturing. There are real benefits to shrinking technology for space exploration. Getting anything into space is expensive, the heavier the payload the more rocket fuel we need to get it out of Earth’s atmosphere. Until manufacturing is moved to space, this will be a constant challenge. Bringing objects down to size maximizes the payload potential and reduces cost.

Millions of dollars are spent to create a single rover for Mars. If something goes wrong at any stage, the machine and the investment is lost. Researchers at the School of Engineering and Applied Science at the University of Pennsylvania are testing nanocardboard to collect data without moving parts. Shaped like a credit card, the aluminum-oxide surface is corrugated with tiny channels. As one side heats in the sun, cooler air underneath is forced through the narrow channels, lifting the plates off the ground.

What can a small flyer, that weighs less than a third of a milligram, do for us on another planet? In Mars’ reduced gravity, the flyers are more efficient and can carry up to ten times their own weight; to be fair, it’s still not a lot. But with the weight and cost low, they can deploy many flyers at the same time, carrying a variety of simple chemical sensors to detect methane and water. It’s been suggested the flyers could carry small particles back to a rover, like a dog rolling in mud (hopefully it’s mud).

The Honey, I Shrunk the NASA Payload is looking for new designs for Mars rovers in miniature. (Credit: NASA)

NASA is onboard with this concept and issued the Honey, I Shrunk the NASA Payload challenge to the public to help lighten their load. Specifically, they’re looking for small rovers that can identify lunar resources for future missions, reducing the need to ship in supplies. The rovers will search for resources for building materials, water, breathable air and food production. Think of it as small scouting missions.

NASA is looking for rover concepts the size of a sandwich that can hitch a ride to the Moon on the next payload. Doing more with less is the name of the game and NASA wants your project ideas and prototypes for a cut of the $160,000 prize bucket.