Out of This World – Black History is Not Just a Month

History is full of untold stories and unsung heroes. There are many people who contributed to the vast and interconnected space industry who never got a news spot and whose stories are only told over a family dinner or drinks between friends. Then there are the people who were positioned to the outskirts and cut from the frame.

It’s a shame Black history is regulated to the shortest month of the year. What’s even more disturbing is that Black history is not considered an integral part of our collective history. It’s a month to cover the most notable Black people in our collective conscious in a lightening round. Black history is cut out of our mutual history and pasted in its own section, because there are Americans and then there are African Americans. Anyone who is not white requires a qualifier and is an outlier. We do not like to hold these two histories together because then we don’t have to acknowledge their past is our past. Instead, Black history is like a piece of fiction describing a world our ancestors never lived in and we didn’t inherit. 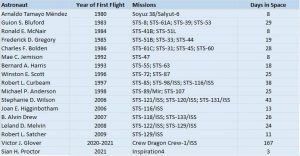 Table of Black people who flew in space and their missions (Credit: NASA).

Robert H. Lawrence was the first Black man selected by NASA for a space program. He was the only research pilot for the Manned Orbiting Laboratory (MOL) Program with a doctorate degree. He died while training another pilot in a F-104 Starfighter and the plane crashed. Had he lived, he would have likely gone on to fly in the Space Shuttle missions.

Their stories are not just of suffering and don’t exist only in relation to the white narrative and experience. Hidden Figures dramatized a part of our history that had largely been forgotten, and that’s only scratching the surface. 17 Black people have flown in space on NASA missions. Their paraphrased biographies and contribution to space exploration are honored here. As we go into March, let’s acknowledge the living and their ongoing contribution to science and space.

Today, we celebrate geologist Jessica A. Watkins, a Mission Specialist onboard NASA’s SpaceX Crew-4 mission going up in April 2022 for a six-month stint on the International Space Station (ISS). She earned her Bachelor of Science in Geological and Environmental Sciences from Stanford University, and went on to get a Doctorate in Geology from the University of California, Los Angeles (UCLA). Watkins studied Mars surface processes, specifically the emplacement mechanisms of large landslides on Earth and Mars.

Aerospace engineer Jeanette J. Epps will fly with the first crew on the Boeing Corporation’s Starliner-1 spacecraft. Her resume is impressive. She was selected as a NASA Fellow in graduate school. According to her bio on NASA.gov, “her graduate research involved extensive testing of composite swept‐tip beams, comparative analysis of analytical models and experimental data for shape memory alloys and the application of shape memory alloy actuators for tracking helicopter rotor blades.” Epps then worked for Ford Motor Company and acquired provisional and U.S. patents. She worked for the Central Intelligence Agency CIA for seven years before becoming an Astronaut in 2009.