Out of this World – Aliens on Venus and Elusive Dark Matter 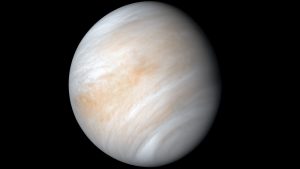 Venus – mysterious and aloof. Where Earth has clouds made of water and ice, Venus says, “hold my beer,” and makes clouds from sulphuric acid. (Credit: NASA/JPL-Caltech)

When we think of alien life, what pops into our heads is green humanoids or many-legged creatures – the stuff of science fiction. However, astronomers are on the lookout for something smaller, more approachable and they might have found it on Venus. Rare phosphine molecules were identified by researchers using the James Clerk Maxwell Telescope (JCMT), then they confirmed their findings with 45 antennas of the Atacama Large Millimeter/submillimeter Array (ALMA) in Chile.

Phosphine can occur in small amounts from natural processes, but the concentration measured in the clouds of Venus is too high to come from a non-biological source. Bacteria on Earth can make phosphine as a byproduct of adding hydrogen to phosphate. Researchers believe the same process is happening on Venus. What these organisms look like and how they compare to Earth organisms is unknown. Venus clouds are highly acidic and composed of 90% sulphuric acid. Earth microbes can’t tolerate that environment.

It’s a far cry from proving extra-terrestrial life on Venus, but it’s a steppingstone. Venus is puzzling in many ways; its atmosphere rotates at a much greater speed than the rocky planet beneath. Past missions and remote observations inform future Venus missions, hopefully we’ll see another spacecraft mission soon.

A new study, led by Massimo Meneghetti of the INAF-Observatory of Astrophysics and Space Science of Bologna in Italy, postulates that we are missing a key ingredient in our theories surrounding dark matter. Dark matter is the unknown substance that makes up the bulk of Universe’s mass and can only be identified through its gravitational pull on other objects.

Dark matter causes gravitational lensing – the distortion of light from distant galaxies. A closer look at galaxy clusters showed nested lensing, smaller lenses inside larger ones at the cluster’s core. The simulations didn’t show the same dense concentration of dark matter in these areas. Dark matter is proving even more elusive than previously thought; however, this new information provides greater detail into its behavior and someday we might have a handle on the nature of this puzzle wrapped in an enigma.