Out of this World – A Little Good News

It’s been a gloomy year, and there’s little hope in sight these days. To offset the malaise, we’re focusing on good news when we find it lurking in the shadows. COVID-19 winter is upon us in the northern hemisphere, and we’ll need all the hope we can get to see us through. 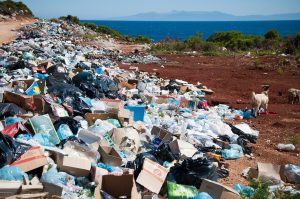 A literal shit-ton of plastic. (Photo by Antoine GIRET on Unsplash)

Plastic is the scourge of humanity, finding its way into the ocean’s deepest trenches, around the necks of animals and into floating islands of plastic waste. The discovery of a plastic eating enzyme in 2018 was a big boon to environmentalists. Called PETase, the enzyme breaks down polyethlene terephthalate (PET) into its component parts making it infinitely recyclable. PET is found in most single-use drinking containers, clothes and many other products. PETase reduces the time it takes to break down PET from hundreds of years to days. While considered a recyclable product, the cost and energy required to recycle PET has a considerable impact on greenhouse gas emissions. According to the EPA, 75.4% of plastic ends up in landfills. Each year, around 2.4 million tons of PET plastic are discarded in the U.S. As many as 1 million sea creatures are killed each year due to plastic waste thrown into the ocean, and there will be more plastic in the ocean than fish by 2050 according to the Ellen MacArthur Foundation.

The same scientists who discovered this enzyme two years ago have built on their success by combining it with another enzyme, MHETase. Combining PETase with MHETase has cut the PET breakdown time in half. They didn’t stop there; instead, they engineered a ‘super-enzyme’ that breaks down PET three times faster.

It’s an exciting discovery that implies even greater strides in PET recycling technology are possible. By breaking down the PET to its original state, it will eliminate the reliance on oil and gas, meaning we’d be able to keep reusing existing plastic without relying on new production. The study was a massive undertaking lead by teams on either side of the Atlantic, including Professor John McGeehan, at the Centre for Enzyme Innovation (CEI) at the University of Portsmouth, and Dr Gregg Beckham, at the National Renewable Energy Laboratory (NREL) in the United States. They worked with Diamond Light Source in the UK and their large synchrotron to point X-ray beams 10 billion times brighter than the Sun at the enzyme and pull out the individual atoms. Scientists at the University of South Florida and the University of Campinas in Brazil performed the computational modeling.

Plastics radically changed our world, and it will take the same science that invented this product to find a solution to its widespread and insidious nature. These results are encouraging while we try to stay afloat in a sea of bad news. We’ll be keeping an eye on PETase and hope to see it utilized in a practical way to reduce our plastic problem.