Out of this World – A Cosmic Heartbeat 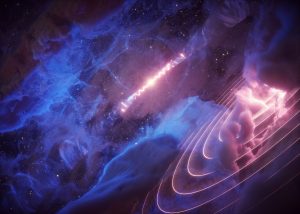 The gas cloud in the foreground is pulsating at the same rate as the quasar in the background, in this artist depiction. (Credit: DESY, Science Communication Lab)

In the Milky Way, about 15,000 lightyears away, is a system with a black hole which is about 10 to 20 solar masses and a giant star 30 times the mass of our Sun. These two objects orbit each other in a 13-day period as the black hole pulls matter from the star. The black hole has an accretion disk where matter accumulates before it’s sucked into the void, but some of that matter is shot out either side of the black hole, in what’s known as a quasar. This quasar is small and is called Micro Quasar SS 433. The jets shooting out perpendicular to the accretion disk emit X-rays and gamma rays.

The locked nature of their orbits and the black hole’s tilted accretion disk in relation its orbit with the star, causes the jets of matter to spiral instead of shooting in a straight line. The spiral has a period of 162 days. 100 light year away, in the Eagle constellation of Aquila, a cosmic cloud called Fermi J1913+0515 is emitting gamma-rays signals at the same rate. This direct link infers a connection between the two and the cosmic cloud’s emission is likely powered by the black hole, even though the cosmic cloud is not in the direct line of the jets.

The astronomy world is abuzz about speculation on this hitherto unheard-of phenomenon. One theory is that the outflow of protons from the accretion disk hits the cosmic cloud, lighting it up with gamma rays. Scientist are still noodling this over and we will certainly see more articles and research come out of this initial finding. In the meantime, we can marvel at the interconnectivity between celestial objects despite the vast space in between them.