In the nearly two years we’ve published the Mapping for Good series here for our Geospatial Times newsletter, we have covered a wide variety of charitable and sometimes just down-right fun mapping projects around the world. Nearly all of them, however, have focused in way or another on how our world is shifting in the face of global change. With this trend in mind, we thought it would be refreshing to look at a mapping project that analyses worlds long since forgotten. Enter the Theban Mapping Project (TMP) of the American University in Cairo. 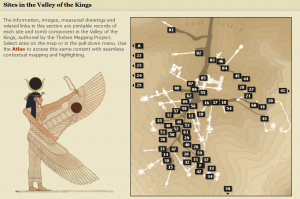 A screenshot of an interactive map allowing users to click on individual tombs within the Valley of the Kings and learn more about each archaeological site.

Since its beginning in 1978, the Theban Mapping Project has been working to prepare a comprehensive archaeological database of the ancient Egyptian city of Thebes. Thebes was a city located on the east bank of the Nile about 800 kilometers south of the Mediterranean, within the modern city of Luxor. Having served as the capital of Egypt during the Middle King and the New Kingdom eras, the city was the most venerated of all Egyptian settlements in its heyday. So why is the project still taking place 40 years later, for a city that stopped growing thousands of years ago? As it turns out, the very issues we’ve covered in our many articles on global change are even effecting the ancient ruins of cultures long since past:

‘With its thousands of tombs and temples, Thebes is one of the world’s most important archaeological zones. Sadly, however, it has not fared well over the years. Treasure-hunters and curio-seekers plundered it in the past; pollution, rising ground water, and mass-tourism threaten it in the present. Even early archaeologists destroyed valuable information in their search for museum-quality pieces.

Today, however, we realize that the monuments of Thebes are a finite resource. If we fail to protect and monitor them, they will vanish, and we and our descendants will all be the poorer. The TMP believes that the first and most essential step in preserving this heritage is a detailed map and database of every archaeological, geological, and ethnographic feature in Thebes. Only when these are available can sensible plans be made for tourism, conservation, and further study.”

With its vulnerable artifacts at the mercy of time, the Theban Mapping Project sees its efforts as more pertinent than ever. With these risks in mind, the project has shifted its focus in the last decade to the famed Valley of the Kings. Having assembled measurements of Theban tombs using modern surveying techniques, the TMP is currently preparing 3D models of the Valley’s contents. In all these efforts, the value of sharing their works’ findings is always viewed as important as the work done in the field. This sharing is accomplished through both academic and more casual publications as well as regular contributions on the group’s website.

To learn more about the Theban Mapping Project and how you can contribute, visit www.thebanmappingproject.com.