Recently we tweeted about a project currently underway at Columbia University’s Center for Spatial Research, Conflict Urbanism, that is using spatial analysis and data visualization techniques to examine the ability of conflict to alter and even create new urban landscapes. We thought the project was so well executed and complex that we decided to highlight yet another project from the Center for Spatial Research for this month’s Mapping For Good article. The Million Dollar Blocks project analyses the flow of incarcerated individuals to and from (and often back to) prison in five of America’s urban centers. 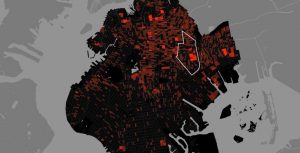 One of the many maps found on the Million Dollar Blocks site, showing such blocks in red across the borough of Brooklyn, New York.

How and why has Columbia U. chosen to look at this issue? As stated on its project site, the effect that such a flow has on a community is not only traumatic on an emotional level but also incurs incredible costs to entire cities and the nation as a whole:

“The United States currently has more than 2 million people locked up in jails and prisons. A disproportionate number of them come from a very few neighborhoods in the country’s biggest cities. In many places the concentration is so dense that states are spending in excess of a million dollars a year to incarcerate the residents of single city blocks. When these people are released and reenter their communities, roughly forty percent do not stay more than three years before they are reincarcerated.”

With unprecedented access to criminal justice data, two labs at the university (the Spatial Information Design Lab and the Justice Mapping Center) have collaborated to visualize these so-called “million dollar blocks” to put a spotlight on the residual costs of incarceration on nearly all aspects of daily life, including education, housing, health and family. They go on to claim, with impactful evidence to back, that prisons have evolved to become the, “predominant government institution in these communities.”

Looking at New York, Phoenix, New Orleans and Wichita, the Million Dollar Blocks project is, “prompting new ways of understanding the spatial dimensions of an area of public policy with profound implications for American cities.”

While we love maps (of course!), this particular project is admittedly one of the more striking demonstrations we’ve encountered of their power to take the seemingly incomprehensible scale of a particular issue and articulate it through the medium of cartography. We highly recommend you take even a quick glance at the many maps already released from this ongoing multiyear endeavor and perhaps even discover that you live much closer to a “million dollar block” than you think.

To learn more about the Million Dollar Blocks project and other efforts being undertaken at Columbia’s Center for Spatial Research, check out their website at http://c4sr.columbia.edu/.