Free For All – November: Free the Truth About Thanksgiving

Although many Americans celebrate Thanksgiving as a reminder of a great feast shared between the pilgrims and the Native Americans, the reality is that there is no evidence of any Natives being invited, or any turkey being eaten. As a sort of ode to the forgotten truth of Thanksgiving, this Free for All looks at maps of the original distribution of Native American tribes in North America. The land that the pilgrims referred to as “The New World” was in fact already a thriving world, but one that had been desecrated by the plagues brought over by the Spanish.

The animation above shows the encroachment of Native lands, although it started long before 1784. It was featured in a Vox article about maps that we do not like to talk about, which also included one of the Trail of Tears and another of current Native American populations in the U.S. Going back to the subject of Thanksgiving and original maps of the Americas, this blog is a good source for some of the oldest maps of the area. It includes a map of New England published by Dutch cartographer Willem Blaeu just ten years after the pilgrims landed, as well as a what is considered the first map printed in North America – also of New England and published by John Foster. Although the blog does not provide much information on Thanksgiving, it is important to note that these maps include some of the earliest physical evidence of the locations of Native tribes in New England. 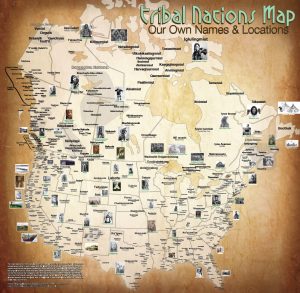 Carapella has designed maps of Canada and the continental U.S. showing the original locations and names of Native American tribes. View the full map (PDF).

Looking beyond New England, there are a variety of maps that incidentally included cultural information such as Native village locations and tribal ranges. This blog post contains old maps of North America from several different sources, including Spanish and French explorers as well as English fur traders. Each map contains the locations of Native settlements or territories, however much of it is unconfirmed and so they cannot be considered a resource for American Indian studies.

To learn more about the modern map of Native tribe distribution featured above, I recommend checking out this article from NPR. This map is quite an eye-opener, as it aims to pinpoint the locations of hundreds of American Indian nations prior to their contact with Europeans. What most people do not realize, including the pilgrims, is that North America was already populated by numerous tribes in its entirety. For data and maps on current tribal lands in the U.S., visit this landing page on data.gov. After reviewing these maps, it should be apparent that North America was not a “New World,” rather it was a thriving old world populated by American Indian tribes. Recently, Canadian developer Victor G. Temprano released an interactive mapping tool called Native-Land, which was featured in an article about Indigenous Peoples’ Day. This powerful GIS tool, which is still a work in progress (and notably not a professional project), allows users to navigate native lands via territory, languages and treaties. The point is to recognize the land you live on and who lived there prior to you; and also, to appreciate the true history of the area. It is amazing to see both the fluidity of tribal boundaries as well as the vast expansion of their territories. 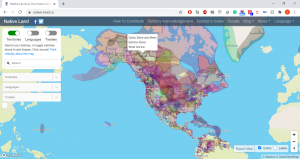 Although it is a difficult subject to talk about, the genocide and removal of Native Americans (or American Indians) from their respective homes is an important part of our history. Despite its dark history, Thanksgiving today is based around the values of family, community and appreciation. To leave you on a bit of a happier note, I’d like to share this article from the American Geographical Society that includes a series of maps showing where your Thanksgiving meal comes from. From all of us at Apollo, we would like to wish you a happy and safe start to the holiday season.