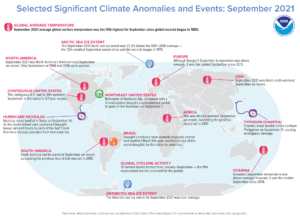 The NOAA extreme weather events map for September 2021 shows that South America had its warmest September on record, while it was the coolest September in Europe since 2013 and in Oceania since 2018 – that said, both regions still had above average temperatures in the month.