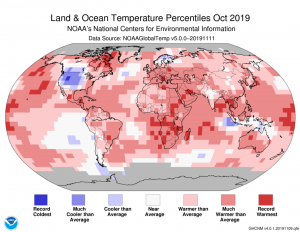 There is far more red (or warm temperatures) on this October 2019 NOAA temperature departure map than blue but that big pocket of cooler weather is hovering right over the corporate headquarters of Apollo Mapping, bringing early season snow storms to the Rockies!