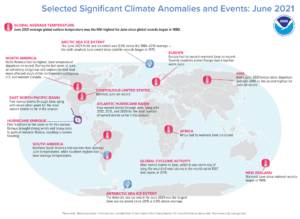 NOAA created a new graphic this month showing, as the name suggests, Selected Significant Climate Anomalies and Events in the month so we will now feature this informative infographic instead! A few highlights from the map: it was the warmest June ever in the lower 48 states of the USA as well as Africa, and the second-warmest in Europe; the Antarctic Sea ice extent was the largest since 2015; and with 5-named storms in the East North Pacific Basin, it ties seven other years for the most so far.