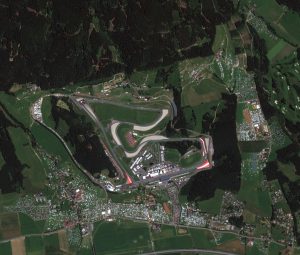 Can you believe it’s August already?! Well since we can’t stop time, add to the enjoyment of your day by heading out on a quick walk around the block! But before you head out, take a gander at this 50-cm WorldView-2 image collected of the 2018 Austrian Grand Prix on July 1st at Red Bull Ring outside of Spielberg, Austria. This image was collected at 12:18 local time, about 3 hours before the start of the race which was schedule for 15:10, so you can see the extent of the pre-race scramble. Now admittedly we’re sports fan but we know little about Formula 1 racing, so it was pretty amazing to see the elaborate celebration and wide-spread camping that surrounds a race weekend! The 2018 Austrian Grand Prix was won by Red Bull driver Max Verstappen who became the youngest driver (17 years and 166 days) to compete in F1 racing at the 2015 Australian Grand Prix.