Launched in late 2016, Map Mavin is our pay-as-you go GIS cloud that lets users make unlimited public and password-protected web maps. Once you upload your vector and raster files to our secure Amazon cloud, you are ready to make and share your web maps in minutes – just like this demo web map we made with vectors and a base layer TIFF from Boulder, Colorado. 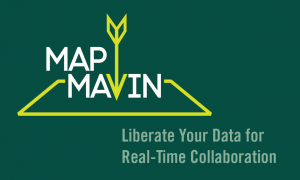 And with our Screen Share function, you can link up with users all around the world to collaborate on a map in real-time. Picture a live WebEx in your mind but just based around a map that moves and changes as the members of your team update information. Imagine the possibilities of working in real-time with a team of collaborators around the world without any GIS knowledge required!

Priced at just $20 per month with a free trial month, there is no other cloud-based GIS on the market that can compete with Map Mavin on price. For your $20 per month, you are able to store and/or download up to 5 gigabytes (5GB); and once you go over 5GB in a month, it costs you just 75-cents per GB from there! As an added bonus, you can cancel your monthly contract at any time.

In the past few months, we released Map Mavin updates that included but were not limited to the following list of fixes, additions and enhancements:

Stay tuned to this series where we will let you know about the Map Mavin changes that were released in the past month.

If you have an improvement or feature addition you would like to add the Map Mavin product road map, let us know by email at support@mapmavin.com.

Are you interested in trying out Map Mavin? If so, you can sign up here. Or maybe you would like a live demo of the product before you sign up? If so, send us an email at support@mapmavin.com and we will get one scheduled right away!