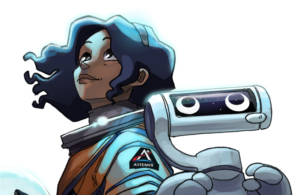 Join Callie Rodriguez and her robot friend, RT, as the explore the Moon. (Credit: NASA)

NASA has released a free graphic novel called First Woman, a fictionalized account of the first woman to explore the lunar surface and her robot sidekick, RT. The graphic novel follows Callie Rodriguez from a child dreaming of the Moon, to astronaut selection and then exploring the Moon. It comes as a free PDF, online read, an audio-only version and as an App. NASA is committed to making this fiction a reality in their upcoming lunar missions.

It’s difficult to imagine a future you can’t see. For young girls and people of color, historical underrepresentation in space aviation and exploration has left marginalized populations out of the equation in the US space program. If you can’t buy your way in with billions of dollars, then you have to rely on existing systems with inherent bias to let you in the door. NASA is attempting to balance the scales. We’ll have to wait and see if this comes to fruition and if its ethos applies to all areas within NASA, not just the ones who end up on camera.